There are some sermons that just hit you between the eyes, and the one given by Father Luke at St Martins-in-the-Veld was a good example. His opening proposition was there there could be no such existence as a passive Christian since they were opposite conditions. Jesus called on us to be ‘doers’ not armchair spectators, and in answer to the what and the how, Father Luke gently reminded that Jesus never expected us to do the impossible, and He equipped us with the tools to do what we needed to.

Expanding on that, the point was made that we are most probably already using the talents or gifts that we have been given, just not always for His ministry. We may not all be called upon to be preachers or evangelists, but all sorts of skills are needed to make for a thriving, joyous and lively church.

If you are reading this, there is a good chance you are already contributing to the broader ministry, but we each need to reflect and consider if He might find us falling short. Not always an easy question to address, as I would be the first to admit.

Coming from a UK rural benefice, it is truly wonderful to experience a different culture with a congregation  drawn from all backgrounds and ancestries. Nowhere have I understood better that the love of Jesus shows us that we are all brothers and sisters united in faith, but who just happen to wear different outer garments. Before the Cross, all are equal.

Imagine a place where you might see a commercial building with huge signs proclaiming ‘Jesus is Lord’, (shame about the tree)?

Or where you might see trucks with Bible quotes in place of commercial ads on the back or sides?

A country with a future that has people unafraid to declare their faith for the world to see, and be ready to share it with others?

A place where our ancestors used to send missionaries…………….

Where in England would a humble security guard ask if he could take you, the hotel guest, to his church on Sunday….?

I am so sad that we are not due to be in Johannesburg again this year on a Sunday, and so cannot take him up on his offer.

With hope and a future restored to us, (a drastic summary), our lives were then changed radically a year ago thanks to Our Lord. Having spent many years in corporate life, mostly in London for the last 12 years, He provided both the means and the incentive to change this. One day talking to one of our sailing friends about our rapidly declining enjoyment of work (again, no coincidence as to the timing!), he asked what was holding us back from just taking off travelling by boat. The reply was that it would take a certain sum of money to activate our ‘pension’.

The following day, we received a letter from a former employer of my wife telling us that they would pay almost exactly that same sum if we did ‘xyz’. Needless to say that we did so, albeit that it took a year to take full effect. Coincidence? Not in our book!!! More on these coincidences later…. Again, thank you Lord so very much.

So it was soon time to look at handing in notice and abandon the 2 hour commute. Before doing so, He had another surprise for us, in that there was the chance to go and help with a project in South Africa for a 6 months, and there was a good financial incentive to do so.

So 2013 has been a year of much travel, with many surprises and openings of faith. For some of us, it is not too evident as to what we are being led to do, but we just trust Him to lead us. It would be stretching imagination to think that all the chance meetings are just that. Recently, there has been an even more strong urge to share some of the experiences, hence this blog.

And He so changed the world…. 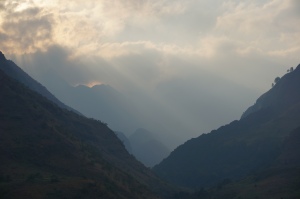 As night becomes day, so did the new dawn come. Apart from a feeling of utter joy, there was the sensation of the world having changed its axis. There was a clarity to sight and hearing that astonished, and a feeling of wanting to share. The guilt trips of the past had been erased, and were incredibly difficult to recall. For the first time, I understood what forgiveness really meant, and with the parallel loss of any sense of hate or anger, it was also the lesson of being able to forgive others. It was like suddenly being able to speak a new language.

So many others will have described the hunger that comes from the change wrought by Our Lord in such cases, the hunger for the Bible, the clarity of understanding, and the sheer gratitude for having picked on such a poor example. The counter to the latter is that the worse the sinner changed, the more evident His work is shown to be.

Any suggestion of getting a message would have been previously dismissed as imagination, and yet now they were much harder to dismiss. When the same image appears in the mind night after night, it is not so easy to disregard. The image was of standing up in our church and telling all, something that simply did not happen in our village. And yet it would not go away. There were 3 ‘reminders’. The first night, it was hearing the testimony of another in which she had ignored a message, until eventually she gave way. The 2nd night, it was taking the Bible, and finding it opened at the story of Jonah. He too ignored the message until after he was obliged to enjoy a cruise in a passing whale’s stomach. The 3rd night was opening a book of a well-known American pastor, and finding the first lines of the new chapter stating that ‘you have a duty to tell others, for if you do not, you do them a great dis-service’.

Ok, message understood! So some weeks later I did the previously unimaginable.

The other message was so clearly implanted that I have not for one second doubted it. We all have to learn to ‘Worship for Ourselves!‘ Mere attendance at church and reciting ritual is not enough, we cannot allow others, eg, the vicar and choir, to do it for us.

In that regard, we each have to get closer to Jesus, and invite Him into our personal space and lives. How often have we heard that all we have to is open the door wide to Him, and yet how many of us have reservations about entrusting our lives to another, and therefore keep the safety chain on the door!

Perhaps the only time for many of us is when we descend to the very depth of despair, beyond all hope of self-recovery, and beg Him to do with us what He will. Such was my case, and He answered with His help and love.

My experience converted belief (or hope as non-believers might prefer to call it) into knowledge. Everything that has happened since has reinforced that Jesus is real and alive for us here and now.

Thank you Lord for everything.

At the Alpha evening that week, there was a realisation that there had been so much missing from church experience to date, and without having had any intention of saying anything, my tongue escaped from the brain’s control. I knew that the traditional Sunday service would never be enough again.

Having inadvertently challenged my good friend David Lake, our Minister, who was sat next to me, abrupt apologies were made only for them to be swept aside. David is a passionate servant and preacher for Our Lord, and is a great mentor. He only offers guidance and encouragement, even in such situations.

Shortly after getting into bed that night, He hit me with huge energy, making my body ripple with it for hours. It was an incredible sensation, feeling as if anything you touched would be changed for ever. Needless to say that it woke my wife, who then witnessed the change happening.

The morning after was like walking on air, and so much had changed.

Being totally honest, career had worked out fine and the ladder had been climbed. A comfortable lifestyle meant we could do what we wanted within reasonable bounds, and we had had a lot of fun. However it had allowed less desirable traits to develop including being very selfish, too quick to speak (and slower to think), and a real lack of consideration for others over the years. That included our family with which there had been distancing (my fault) at the least difference of opinion.    In truth, even I did not like myself.

Looking back, there was a whole litany of things over decades that I had said and done that made me ashamed, and the guilt made me cringe every time I thought about them. Put into a Christian context, I believed but had not behaved. This was a person who stayed at the back of the church, and found comfort in the familiar rituals and hymns. The ‘Peace’ was a bit unsettling as it meant stepping outside one’s personal space.

Encouraged into attending an Alpha Course (for a second time), the approach was so very different to the previous one, and much more revealing. It affected the small group deeply, and broke down many of the internal barriers and pain that we had built and maintained. It also opened a window into how else one might see faith.